NOBULL Shoes Guide | Where to Buy, Sizing, Cleaning, High Vs Low-Top, and More

In 2014, NOBULL was founded and debuted their first-ever NOBULL Trainer. This model was marketed to and designed for the CrossFit and functional fitness community. Since the first NOBULL Trainer that was launched in 2015, NOBULL’s cross-training shoes have remained fairly consistent. However, they have added more products to their inventory.

I’m constantly being asked questions about NOBULL shoes on my YouTube channel and written review content. Since NOBULL shoes have slightly higher price tags, it’s totally fair to want the full picture for certain models before investing. After all, the last thing you want is to invest $130+ USD into NOBULL shoes only to find out they don’t work for your training needs.

In this NOBULL shoes guide, I’m going to break down all of the key details that you need to know about NOBULL shoes. We’ll talk sizing, how to clean them, the high-top versus low-top trainer, and much more.

What Are NOBULL Shoes?

Since their inception into the CrossFit market in 2015, NOBULL has continued to produce different shoes for a variety of product categories. Their main product is the NOBULL Trainer and this is the shoe that arguably put NOBULL on the map especially in the worlds of CrossFit, functional fitness, and lifting.

All of NOBULL’s shoes come with the same ideology that NOBULL founded the company on. Basically, they market their shoes and products as having no fluff and only the essentials that you need to perform your best.

Must Read: See where NOBULL lands against other top models on my Best Cross-Training Shoes round-up! 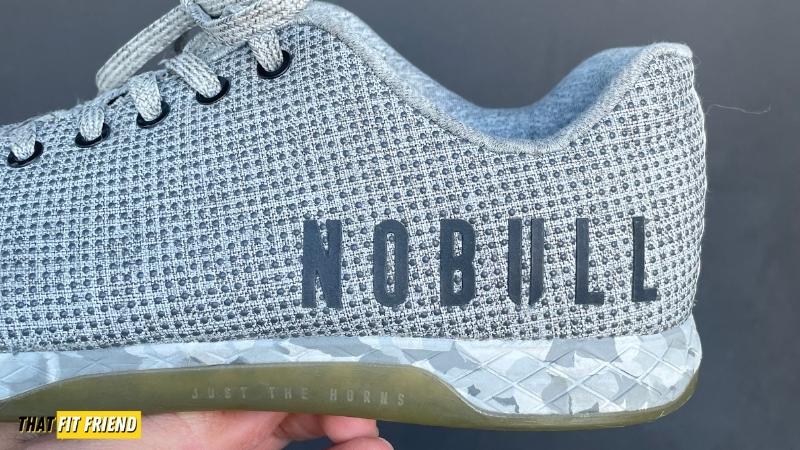 Currently, there are multiple NOBULL shoe categories that you can look into and these include:

As you can see, the question of “What are NOBULL shoes?” has expanded tenfold since 2014. What started as only cross-training shoes has grown into multiple shoe categories.

Where to Buy NOBULL Shoes?

Essentially, if you’re wondering, where to buy NOBULL shoes, then you’re going to want to look at NOBULL’s site and Rogue Fitness as these are the only two online retail outlets that have stock for NOBULL’s shoes fairly consistently.

There are other online retail outlets as well that have NOBULL shoes on them like Amazon. However, oftentimes you’ll only find random sizes or lightly used NOBULL shoes on these platforms. Hence why I don’t really acknowledge them as being a reliable and consistent place to buy NOBULL shoes. 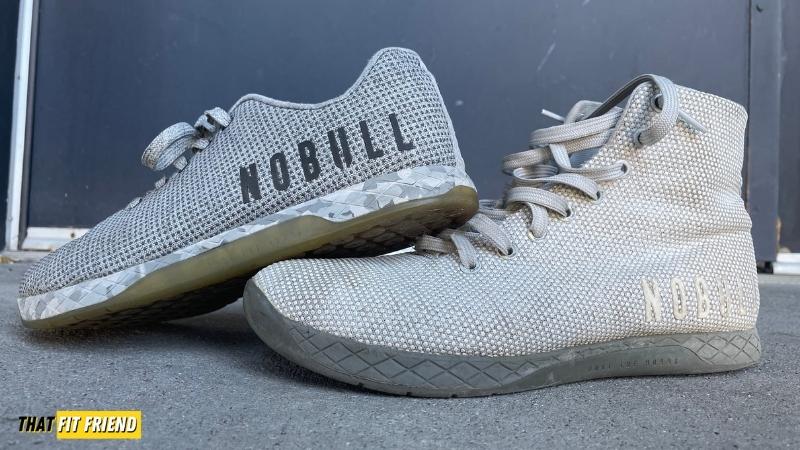 Currently, the only physical stores in which you can NOBULL shoes are NOBULL’s own signature flagship stores. As of right now, there is only one physical NOBULL store at the moment.

Outside of the locations above, there are no larger retail outlets that you can try on and buy NOBULL shoes at. 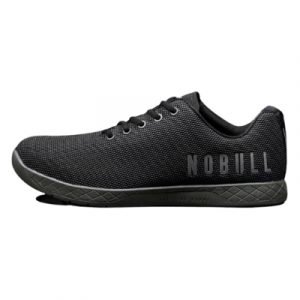 How Do NOBULL Shoes Fit?

However, with NOBULL offering so many different types of shoes now, I’d strongly suggest checking out their product details page and looking at other user-feedback reviews to get a better scope of how certain shoes are fitting for others.

In regard to NOBULL Trainers, I’ve worn the low-top and high-top models for multiple years now and I’d suggest going true-to-size on both. The length fits fairly true in both models and their toe boxes are decently wide for athletes and lifters with neutral or slightly wider feet.

The only caveat between these two is that the high-top can feel somewhat tight and hard to get on for certain lifters, so if you know that you have a wider foot or a thicker ankle for that matter, then you may want to size up a half size in the NOBULL high-top trainer.

How to Clean NOBULL Shoes

To properly clean and wash your NOBULL shoes, despite the model that you’re using, I’d suggest doing the following three steps.

If you do these three steps, then you will make your shoes last much longer and add months to their lives. Far too often, I think lifters and athletes default to throwing their shoes in the washer and dryer or using harsh soaps on them. 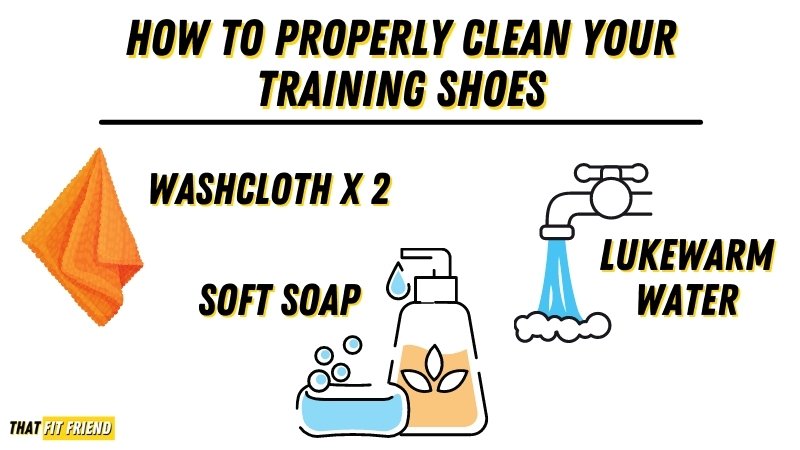 Harsh soaps and waterlogging shoes in wash machines, then aggressively drying them in a dryer can deteriorate the different types of materials used in shoes. More specifically, the glues and polyurethanes used in midsoles and uppers are typically the first areas to run into durability issues when not cleaning shoes properly.

From my experience, too, NOBULL trainers specifically can be prone to having their midsoles change densities slightly when excessively waterlogged. That being said, spot cleaning as mentioned above will take longer, but your shoes will also last longer. Thus, making your investment last much longer.

Of all the shoes NOBULL offers, two of their most popular models include the original NOBULL Trainer and the NOBULL High-Top Trainer. Despite having pretty much the same construction in regard to materials used in each shoe, they both perform slightly due to the higher boot in the high-top model.

Below are three major differences that I’ve noticed between the NOBULL Trainer and the NOBULL High-Top Trainer.

The first difference and the most obvious is that the NOBULL High-Top Trainer’s boot comes up much further than the traditional NOBULL Trainer. The higher boot provides a bit more ankle support compared to the traditional trainer.

However, when laced tightly and fully up, I have noticed that the boot can actually limit dorsiflexion slightly. This is similar to most high-top shoes that have sturdy upper constructions like the NOBULL Trainer’s Superfabric. That being said, if you’re training in the high-top model, then you may want to experiment with how tight you want them in regard to your performance. 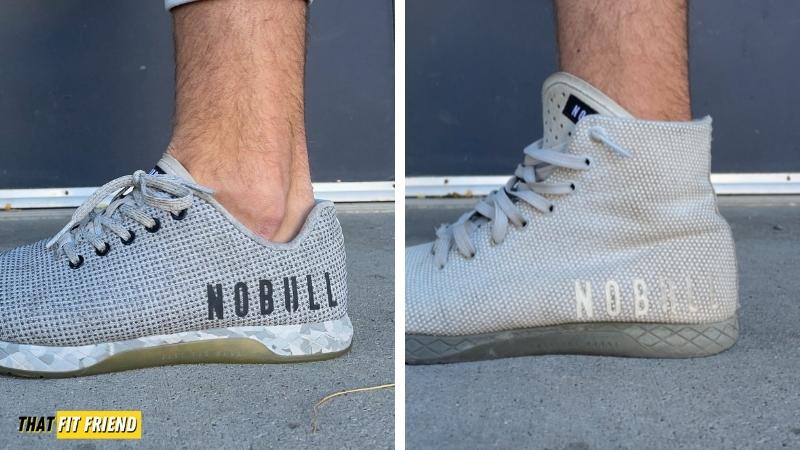 Check out the image above to see a reference for the NOBULL Trainer and NOBULL High-Top Trainer’s sizing and fit on me.

Another not so commonly discussed difference between these two trainers is the foot temperature they can both provide. The high-top model is not always my favorite shoe for longer sessions in hot settings because this shoe can make your foot exceptionally hot.

The upper construction in both models is super durable and lightweight, however, the Superfabric isn’t the most breathable so that is a difference worth noting in some contexts for the high and low-top models. 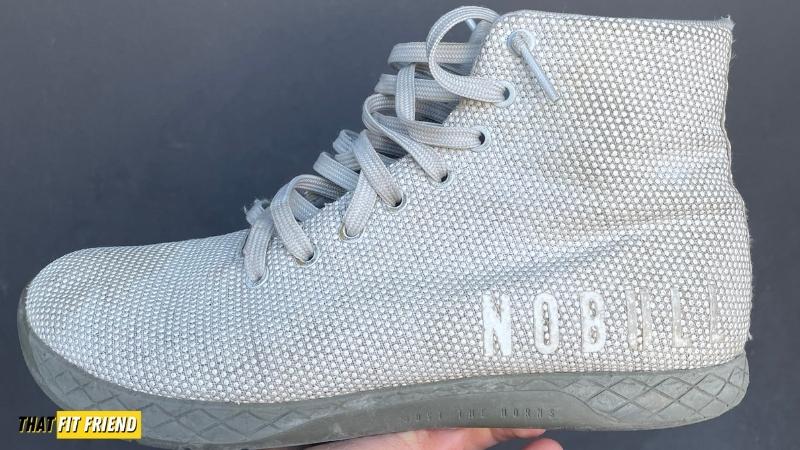 Personally, I actually like the high-top trainer better and use it more often than the low-top model, so I don’t necessarily see this as a bad thing, but it is something to note that is different between these two shoes. For example, there are certain times in hotter workout settings where I’ll take other models over it.

Overall, this isn’t the biggest price difference, but I think it can matter when you factor in certain contexts and how you plan to use the shoe. 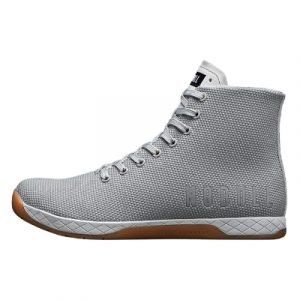 Why Are NOBULL Shoes So Expensive?

NOBULL shoes definitely tend to air on the more expensive side and I think this is due to two reasons. First, is NOBULL’s branding and marketing. NOBULL does a really good job at cultivating a community through their marketing and usage of their NOBULL professional athletes.

Both of these, I think at least, influence the price of NOBULL shoes specifically, and make a majority of their gear a bit more expensive than other budget-friendly shoes on the market.

Second, NOBULL shoes are consistent and deliver consistent performance. This being said, I think once you’ve created certain products that have enough momentum behind them in regard to positive feedback from mass community usage, then you can leave price points alone. Thus, why I think the price of NOBULL shoes never really fluctuates.

However, please note, these are only two of my thoughts and opinions. Everyone has their own idea and opinion as to why NOBULL shoes are so expensive and if they’re worth it.

When was NOBULL Founded?

As NOBULL continues to expand and dive into different product categories, it’s been really cool seeing how their products have held up to others on the market. If you have any additional NOBULL shoe questions or how certain models perform, feel free to drop a comment below.

Also, if you have any NOBULL Trainer-specific questions that you’d like answered, you can also shoot me a message on Instagram and I’ll help where I can (@jake_boly).

That Fit Friend is a site that is supported by myself (Jake Boly) and its readers. If you purchase products through affiliates links on this site, then I may receive a small commission on the sale. These commissions help keep the lights on here at That Fit Friend so I can continue to create content and they help me purchase new models to review!