If you’re on the market for a new pair of Converse Chuck Taylor All Stars, then hopefully this guide finds you well and answers whatever questions you may have about Converse before investing.

When Did Converse Come Out?

Converse was originally a rubber company that was founded in 1908. Less than a decade later in 1917, they produced their first pair of shoes marketed with the name “Non-Skids”. Non-Skids were composed of a rubber sole and canvas upper and were originally marketed to basketball players.

One of the major reasons why so many gravitate towards and love Converse Chuck Taylor All Stars is that they’ve stayed relatively true-to-form over the last 100 years.

Were Converse Originally Made for Basketball?

Yes! As mentioned above, the first pair of Converse were called “Non-Skids” and marketed towards basketball players. In 1921, Charles “Chuck” Taylor (a semi-professional basketball player), joined Converse as a salesman to help popularize Converse and establish their authority in the basketball scene.

A few years after Taylor’s arrival, his thoughts for improving the current Converse shoe started to gain traction internally at the company, and Converse soon adopted multiple ideas he had for altering the current shoe. Some of these changes included additional ankle support, a more flexible sole, and signature branding for Charles “Chuck” Taylor.

This branding soon became a mainstay on the shoe and this model was one of the first, if not the first, celebrity-endorsed shoes that had mass-market appeal and attention. Thus, the creation and popularization of the Converse Chuck Taylor All Star.

Converse began to truly pick up steam in the late 1920s and then carried that momentum through the 1930s-1950s. Throughout these decades, Converse became a standard for basketball players of all levels.

Throughout these three decades, Converse saw incredible levels of growth and experienced their first slowdown in dominating their respective market share.

In the 1960s, Converse controlled a majority of the basketball market share and they were starting to be adopted by a variety of different sub-groups.

Then in the mid-1970s, Converse started to experience financial struggled in addition to their shoes becoming less popular in the basketball scene. In fact, it’s said that the last time Converse was worn in a professional NBA game was during the 1985-1986 season.

Converse’s history is marked with ebbs and flows of popularity. At their peak, Converse dominated the basketball shoe market and after they slowed down in the 1970s and 1980s, they started to regain popularity as a more retro and casual footwear option.

More specifically, Converse started to gain traction once again during the 1990s with the help of their popularization by musicians, strength athletes (powerlifters), and artists wearing them as their main shoe of choice. After the 1980s and 1990s, Converse soon became known as a tried and true classic for casual streetwear.

Yes, to an extent.

In 2003, Converse was acquired by Nike. This acquisition then brought a few changes to the core construction of Converse shoes. For example, the current and modern Converse Chuck Taylor All Stars now have a thicker and more cushioned sole compared to the original and earlier models. 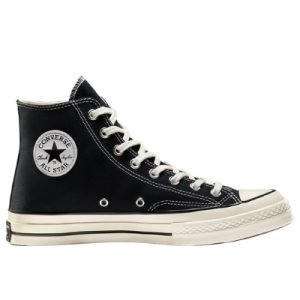 This increased cushioning has made Converse a much more comfortable option for daily wear. However, Converse is still not the most comfortable option on the market for all-day wear and many point out their toes often feel squeezed after wearing them for longer durations.

For context, I wear a size 10 in my normal shoes and cross-training shoes but opt for size 9 with Converse Chuck Taylor All Star. I do this because I like a snugger fit and so they don’t look like clown shoes on me.

Should You Size Down In Converse Chuck Taylor All Star Shoes?

On Converse’s site, they recommend sizing down a half-size for Converse Chuck Taylor All Star. This means that if you wear a 10 normally, then you’ll want to opt for a 9.5 if you’re investing in a new pair of shoes.

Personally, I like to size down a full size because it provides me with a snugger fit and if your Converse shoes run too big, then you run the risk of looking like you’re wearing clown shoes. If you want to avoid this, then I’d highly suggest trying on a pair or two before investing if you can.

Can You Squat In Converse Chuck Taylor All Stars?

Yes. Converse Chuck Taylor All Star shoes have been a popular option for squats due to their flat build and fairly stable midsole and outsole construction. These elements combined make these shoes a great squat shoe option for the lifter that loves squatting in flats.

Both the high-top and low-top Converse Chuck Taylor All Stars work for squats, but I’d recommend being mindful of the high-top version and lacing them super tightly and all the way up, as this could potentially limit ankle mobility.

Can You Deadlift In Converse Chuck Taylor All Stars?

Absolutely. Converse are fantastic for deadlifts because they have a flat sole with a fairly minimal stack height. These features provide lifters with a better means of gripping the ground beneath them and limiting some of the material that separates then the foot from the floor to optimize one’s deadlift range of motion.

It is worth noting that the newer Converse models do have a bit more cushioning than earlier iterations, which can actually make these shoes sub-optimal for the dedicated strength athlete that really wants to optimize their deadlift with things like deadlift shoes and deadlift slippers.

Why Are Converse Good for Lifting?

Converse Chuck Taylor All Star shoes offer a fairly stable construction which makes them a fantastic option for heavier lifting. Their flat midsole and outsole construction do a great job at limiting compression and their canvas upper provides a lightweight and maneuverable fit.

On top of being great for heavy training, Converse Chuck Taylor All Star also has a fairly cost-efficient price point that sits between $40-$60 USD. For this reason, they’re a good cost-efficient shoe that can tackle a variety of lifting needs along with being great on a daily basis.

How Much Do Converse Weigh?

Converse are not the lightest piece of footwear on the market. For a size 10 Converse Chuck Taylor All-Star (High-Top), the weight comes out to about 14.3 ounces. 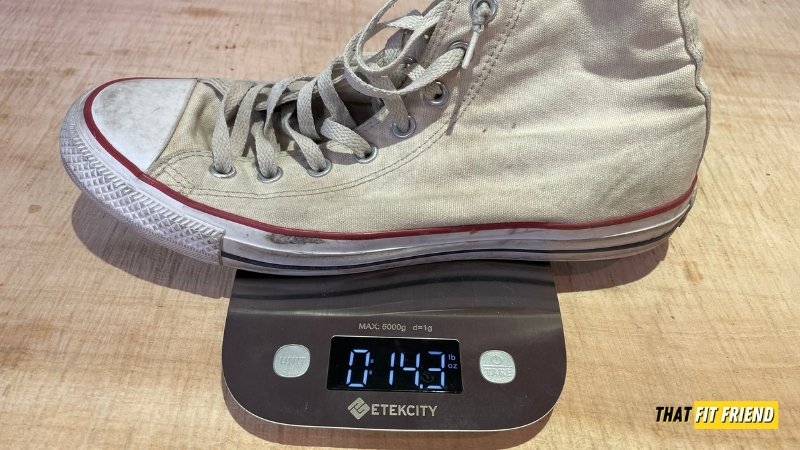 Note, special edition models can weigh more or less than traditional models due to different uppers and additional branding elements.

Are Converse Worth It?

Personally, I like Converse because whenever you purchase a pair you know exactly what you’re getting. The meat and potatoes of this tried and true classic have remained relatively unchanged for decades. This makes the Converse Chuck Taylor All Star a great option for those that love simplicity.

If you have any questions about Converse Chuck Taylor All Star shoes, drop them below!

2 thoughts on “Converse Chuck Taylor All Star Guide | History, Sizing, and Much More”