In this barefoot shoe showdown, we’re going to be comparing Xero Shoes 360 versus Vivobarefoot Geo Racer Knit. Both of these barefoot shoes are designed for training and daily wear. I was intrigued and excited to test both and see which model works best for certain contexts.

Below, we’ll break down all of the key details between Xero Shoes versus Vivobarefoot and discuss which model would be best per the context of your wants, needs, and preferences.

If you’re on the market for new cross-training shoes, make sure you check out the That Fit Friend Training Shoe Finder to be matched with your best models.

To help you synthesize which model would match your needs best, I’ve broken down how the Xero Shoes 360 and Vivobarefoot Geo Racer Knit perform head-to-head against one another below.

For lifting, I think most will really enjoy the Xero Shoes 360 and Vivobarefoot Geo Racer Knit. Both of these models deliver wide toe boxes to accommodate full toe splay. Comparing the two, the Vivobarefoot model’s toe box is slightly wider and has a more anatomical shape to it.

Full toe splay is a key performance detail for barbell athletes and recreational lifters than want ample ground feedback and to increase their foot’s surface area with the ground. 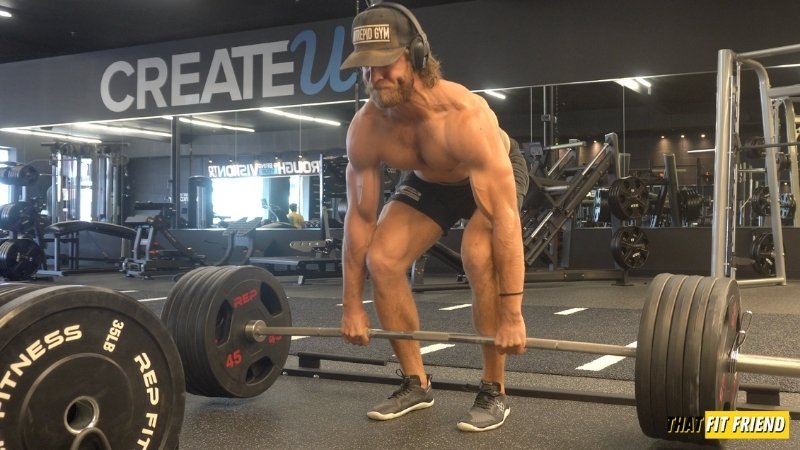 On top of their wider toe boxes, each model also gives you the opportunity to remove their insoles to get even closer to the ground. This is a fantastic perk for lifters that want to bias their attention and weight in certain areas of the foot to drive specific adaptations.

In regard to each model’s insole, the Xero Shoes 360′ is slightly thicker in nature, so if you leave it in when training, I actually think this model is a bit more forgiving for impact and why it’s better for functional fitness-focused lifting. For example, if you’re newer to barefoot shoes, then I’d suggest keeping the insole in for the 360 and Geo Racer Knit until you’ve acclimated. 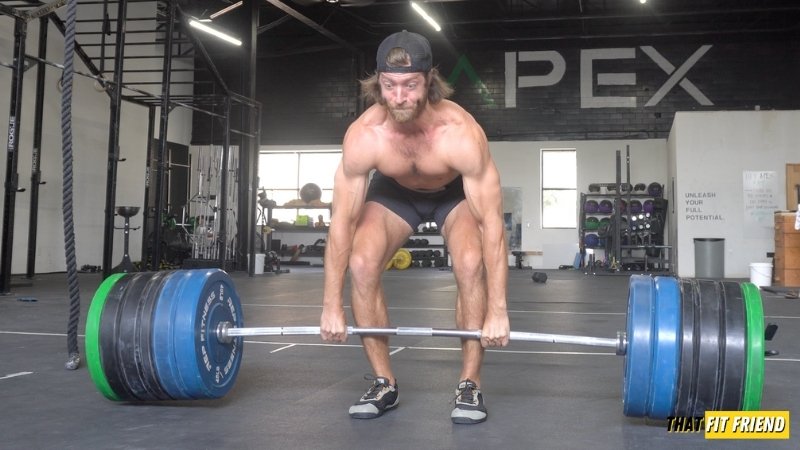 In each model, I’ve deadlifted over 500 lbs and have squatted just under 400 lbs and stability is never a concern. I think for more cross-training-focused individuals, the Xero Shoes 360 is a slightly better model due to its upper durability, and if you’re more of a recreational lifter, go for the Vivobarefoot Geo Racer Knit because it also looks good for daily wear.

Winner: Tie. Both are great for lifting. However, if you’re more into functional fitness, go with the Xero Shoes 360, and if you’re more into static strength work and wearing your barefoot shoes on a daily basis, then go Vivobarefoot Geo Racer Knit.

For more versatile-style training, both of these models will work and each shoe excels in different ways. I do have a preference for which model I think works slightly better and I’ll explain more on that below.

Personally, I like the Xero Shoes 360 slightly better for this style of training for three key reasons. First, the insole is slightly more responsive which is a subtle but important detail for anyone acclimating to wearing barefoot shoes for this style of training. Versatile training can have more high-impact activities, so having a bit more forgiveness is never a bad thing. 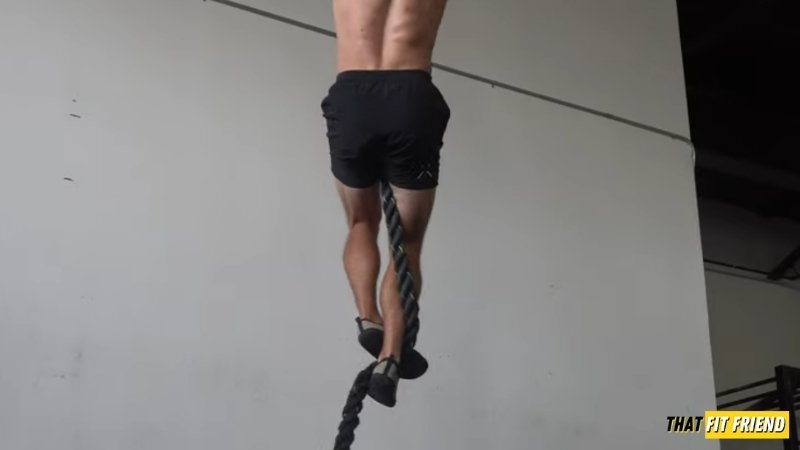 Third, the toe box has a slightly more reinforced construction. In the Vivobarefoot Geo Racer Knit, I love the knit upper, but it’s so maneuverable I noticed that my feet would slide slightly during things like broad jumps and box jumps. In the Xero Shoes 360, you don’t have this issue to the same degree due to the reinforced suede toe box material. 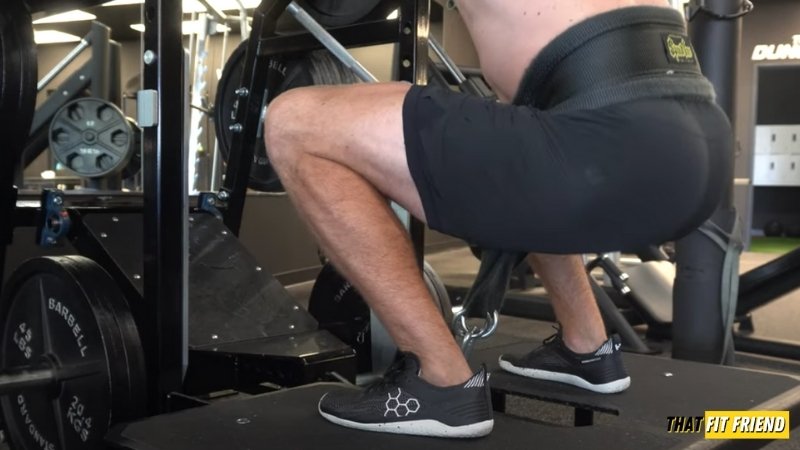 Note, this isn’t to say the Vivobarefoot Geo Racer Knit won’t work for more versatile training, it just falls slightly short for upper durability. With knit uppers, you always sacrifice durability slightly for comfort and breathability and this is the case for the Geo Racer Knit. 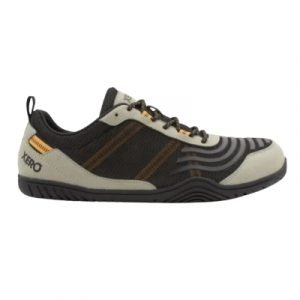 For shorter runs, I enjoy both models, and once again, for slightly different reasons. If you’re starting to acclimate to barefoot running, then these shoes are both good options for you. For more serious runners that train in barefoot shoes, I’d suggest looking into other more running-focused models.

In the context of this comparison, I like the Xero Shoes 360 model better for outdoor runs and training. The upper is a bit easier to clean and it has a slight edge with durability. I’ve worn these both on pavement and on dusty trails and have had no issue with performance and durability. 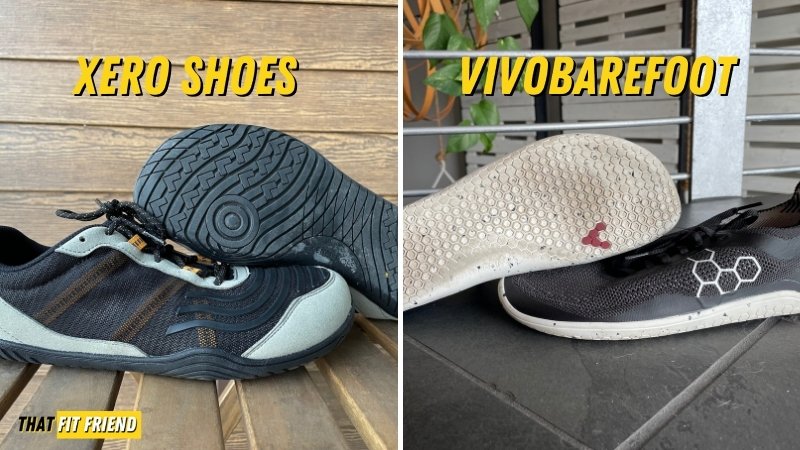 For indoor running, I really enjoy the Vivobarefoot Geo Racer Knit. The outsole on this model is super maneuverable and the knit upper is breathable. This is great for those running on treadmills in hotter gyms where they want to avoid having their feet get overly hot or sweaty. 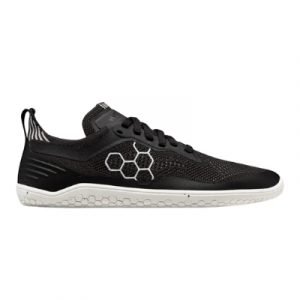 Below, I’m going to break the construction section down into multiple parts to make this barefoot shoe comparison more digestible for you.

We’ll cover each part of the shoe individually to help you further contextualize which shoe is best for you and your needs.

Both models feature full rubber soles and they both utilize their own unique tread patterning. The Xero Shoes 360 model features a tread to promote multi-directional activity with additional grooves for traction. 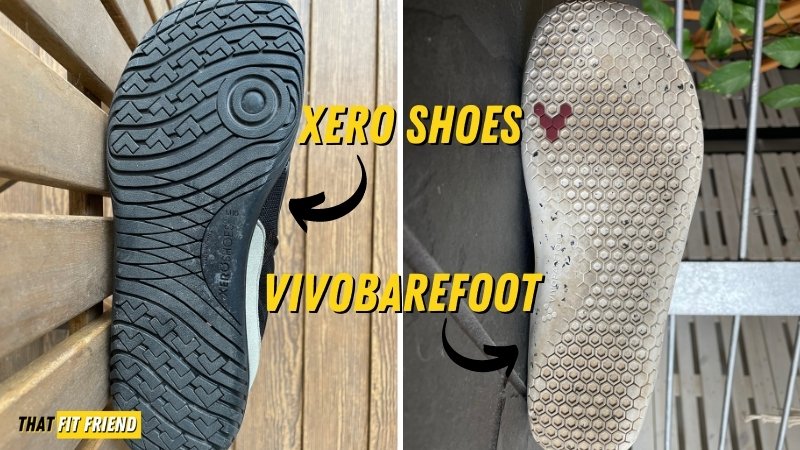 Unlike the Xero Shoes 360, the Vivobarefoot Geo Racer Knit has a consistent hexagonal pattern. This material grips best on gym floors and on treadmills and I genuinely like each sole’s patterning. They’re both different, but both perform well.

The upper construction of each model is also drastically different which makes each model unique and good for different contexts. The Xero Shoes 360 has a huarache-inspired design, like pretty much all Xero Shoes, and a breathable mesh with a 3D upper print.

The overall upper construction on the Xero Shoes 360 is specifically designed for cross-training workouts. Thus, this model has a slightly more “beefed-up” upper construction focus and has thicker and more layered material compared to the Geo Racer Knit. 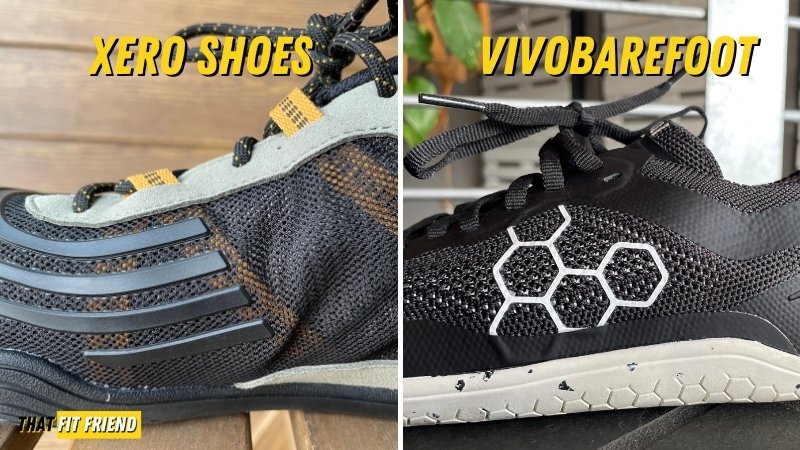 The Vivobarefoot Geo Racer Knit’s upper is super lightweight, flexible, and breathable. The entirety of the upper is a blend of knit and synthetic materials with no external stitching. This gives the Geo Racer Knit a sleek and lightweight feeling in both training and daily wear settings.

The lace and tongue construction in each model are both great for locking down the foot as a whole. The Xero Shoes 360 model features six total eyelets with the sixth being used for lace-locking. Two of the eyelets utilize the huarache loops to help provide additional mid-foot security.

The tongue on this model is a bit thicker in nature and it doesn’t slide at all during training sessions. Additionally, the tongue’s construction feels pretty durable across the board.

The Vivobarefoot Geo Racer Knit has seven total eyelets with the seventh being used for lack-locking. The wider laces in this model are awesome and never come loose during daily wear or training sessions.

The one thing to note about the Geo Racer Knit’s tongue is that it’s wider and thinner in nature. This means that it could be prone to tearing if you jerk on the tongue from one side. I’d suggest using two hands to pull up the tongue when lacing this model up.

Both models feature removable insoles. Overall, the insoles both provide a nice layer of comfort when breaking in the shoes and getting used to them as a whole. 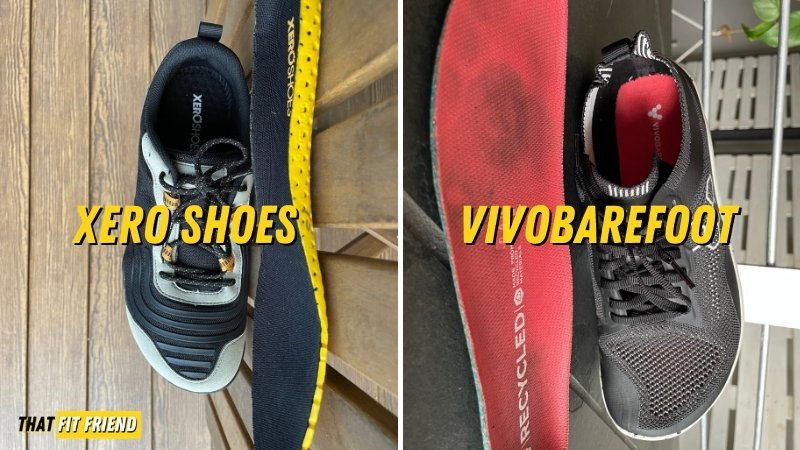 Plus, it’s nice that both models have finished interiors so if you choose to take out the insoles, there’s no awkward laces or unfinished construction to stand on.

The main differences between the two are that the Xero Shoes 360 insole is slightly thicker and the Vivobarefoot Geo Racer Knit’s insole is made out of recycled material — which is a really cool aspect for sustainability.

Across the board, I’ve enjoyed the durability of the Xero Shoes 360 and Vivobarefoot Geo Racer Knit. Each shoe has construction features to help increase its lifespan in regard to how it’s supposed to be used. I think when assessing each model’s durability it really comes down to how you plan to use each shoe.

For example, the Xero Shoes 360 takes the win for durability when it comes to cross-training. The knit on Geo Racer Knit is durable, but I worry about its long-term ability to resist external friction and would recommend avoiding it if you can. You’ll get more out of your Vivobarefoot Geo Racer Knit if you limit their use to daily wear and recreational gym wear. 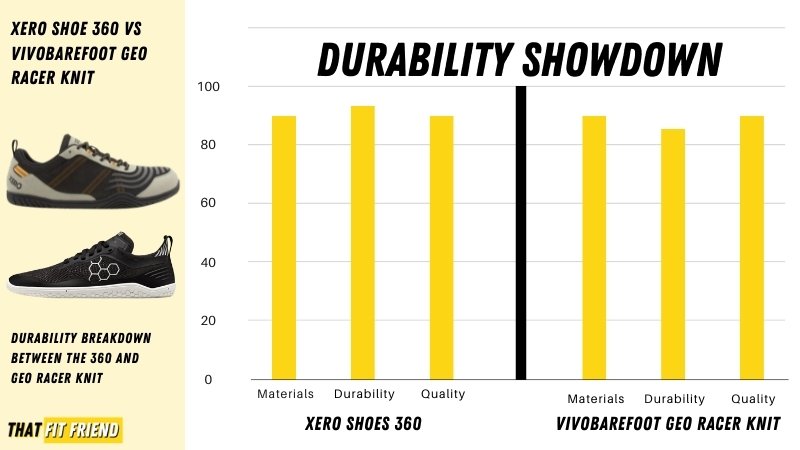 Both shoes are really strong performers with durability, I would just stress being conscious of what you’re buying them for and how you plan to use them. When in doubt, go Xero Shoes 360 for functional fitness and Vivobarefoot for daily wear and lifting.

Overall, the sizing for the Xero Shoes 360 and Vivobarefoot Geo Racer Knit are pretty similar. They both fit true to size and have adequate width in the toe boxes for wider and flatter feet. Additionally, both models have relatively true lengths, so you shouldn’t have to worry about shifting your sizing.

As always, with sizing, I’d highly suggest also looking at other reviews on each shoe’s product page to get a good idea for each model’s sizing. More input is always a good thing for sizing due to the vast differences in everyone’s foot anatomy.

There’s a fairly big price difference between the Xero Shoes 360 and Vivobarefoot Geo Racer Knit which is why I want to stress once again the consideration of each shoe’s durability and how you intend to use them.

For the Xero Shoes 360, you can expect to pay $119.99 USD. This price point is similar to what you would pay for other high-performing cross-training shoes on the market. The Vivobarefoot Geo Racer Knit has a price point of $170.00 USD, which is far from cost-efficient.

Personally, I do think both models’ price points can be justified based on how you intend to use each shoe. They’re both constructed pretty well and each offers its own unique take on barefoot training.

Xero Shoes and Vivobarefoot both make great barefoot shoes. Each company takes a slightly different approach to deliver high-performing barefoot shoes for a variety of settings.

In the context of this comparison, the Xero Shoes 360 is the superior model for functional fitness due to its durable upper construction and slightly more responsive insole. The Vivobarefoot Geo Racer Knit is a fantastic option for lifting and daily wear.

If you have any questions on this comparison and need additional guidance, drop a comment below or reach out me personally via Instagram (@jake_boly).