They both deliver HOVR midsoles, TriBase outsoles, and signature The Rock branding, but other than that, the 4 has been pretty much reworked. In this UA Project Rock 3 versus Project Rock 4 article, we’re going to discuss all of the key differences between these shoes.

If you’re interested in new cross-training shoes, make sure you check out my Best Cross-Training Shoe Round-Up. This article will help you choose the best model per your performance needs and asks.

For my performance-focused friends, I’m going to break down how the UA Project Rock 3 and Project Rock 4 compare in multiple training settings below.

The UA Project Rock 3 and 4 both perform similarly in regard to promoting stability under various loads. They both feature Under Armour’s HOVR midsole technology and have TriBase outsoles. These construction traits provide a nice blend of stability and versatility in lifting settings.

In both of these models, I’ve trained up to 425 lbs with things like trap bar deadlift and barbell deadlifts and their stability was okay across the board. Once you surpass this load, you’ll start to notice a little more compression and that’s due to the HOVR midsole and higher stack heights in each model. 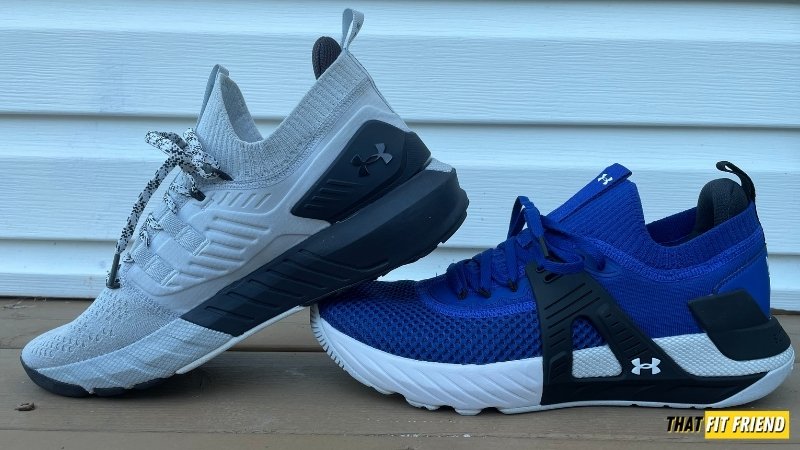 For most recreational lifters who regularly train with dumbbells, machines, and barbells casually, I think the stability in each model will be just fine for their lifting needs. Neither model will be overly great for the die-hard strength athlete, but it’s important to recognize that these models are not built for this demographic and type of athlete.

The TriBase outsole on each model also does a good job at promoting stability when working on machines like leg presses or doing unilateral lower body exercises like lunges. This construction feature provides a nice base to fully grip the floor with the foot with.

Winner: Tie. Both models will support up to 425 lbs with limited compression. 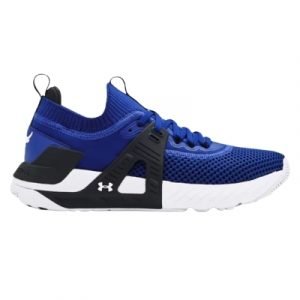 For HIIT, agility, and plyometrics workouts, both models perform similarly as well. The UA Project Rock 3 and 4’s midsole and outsole being so parallel provide a nice level of consistency with this form of training. The HOVR midsole is responsive for plyometrics and fairly forgiving for landing phases.

The one key difference between both of these models is their upper constructions. Personally, I think the UA Project Rock 4’s upper is far better for more versatile-style training. The mesh in the forefoot breathes better than the PR3 and shows better signs of longevity with prolonged use. 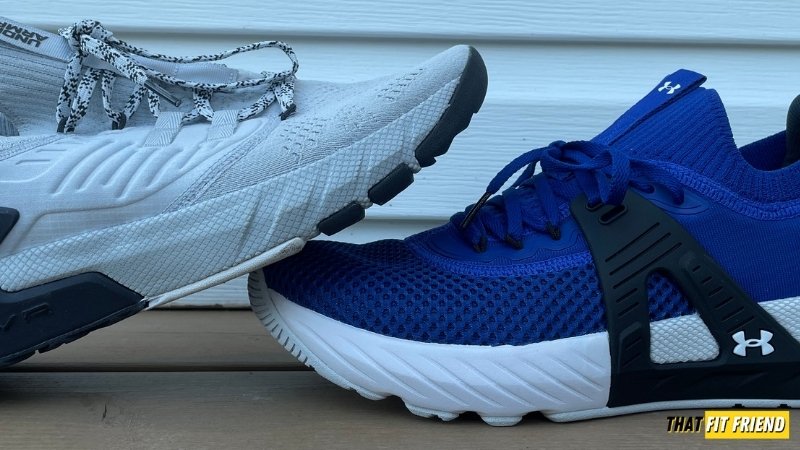 In addition, I like the mid-foot TPU wrap for providing the foot with a nice “locked-down” feeling in this model. I have some lace durability concerns with this model and the TPU wrap, but from a performance point of view, I do enjoy this new addition.

Both models feature a heel counter tab to prevent heel slip which is also a perk for versatile training. The one difference though is that the PR4 fit much better across the board and the PR3 ran small so the toes often felt jammed in the toe box when training with this shoe in this context.

In the context of shorter runs, both of these models will support runs up to about 4 miles and they’re decent for tempo running. They can feel a tad clunky for sprints, but that tends to be a standard when using thicker training shoes like the Project Rock shoes. 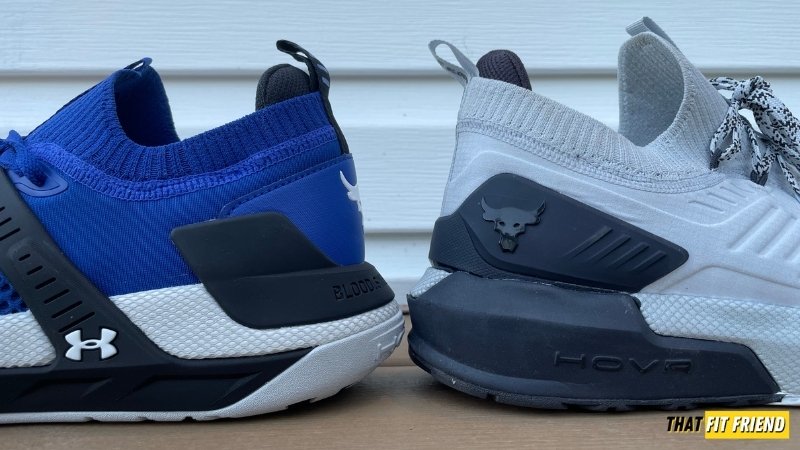 Since both models feature similar outsoles, midsoles, and heel-to-toe drops of 8mm, they should work for most casual lifters who like to run before or after their workouts. I noticed that running more than 4 miles in these shoes can be a bit uncomfortable, and in this context, you’d likely be better off investing in a more running-focused shoe.

The one edge that the Project Rock 4 has over the PR3 is its fit. With the PR3 often running so small on lifters and athletes, the toe box can feel super crammed in this model especially for those who run with a more forefoot striking style. 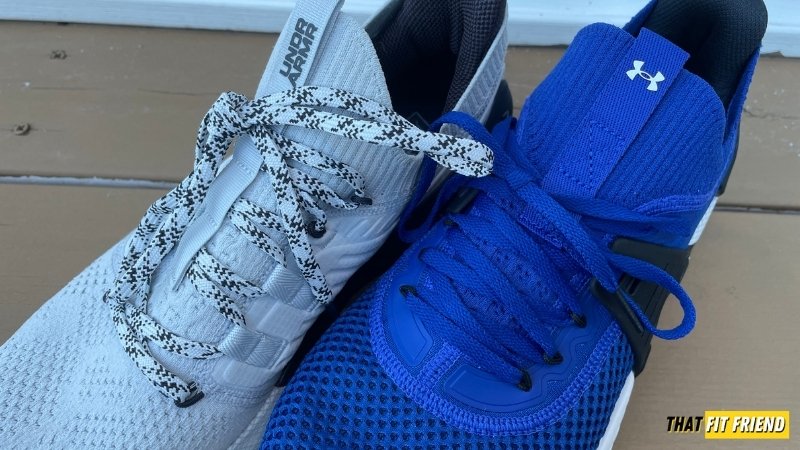 For daily wear, you can expect both models to feel comfortable for longer durations and to work well for things like errands, yard work, and other activities where you’ll be on your feet for a while. The only caveat is once again the sizing. If you don’t get the sizing right in the PR3, then this shoe can get uncomfortable rather fast. 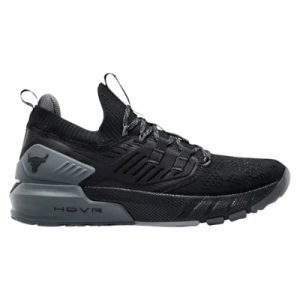 When it comes to construction comparisons between shoes in the same line, the devil’s always in the details. Below, I’m going to break down each shoe’s construction into individual sections.

The UA Project Rock 3 and 4 both feature Under Armour’s TriBase outsole technology. This feature is nice for promoting overall stability and a tripod foot position. From a performance point of view, there are not a ton of differences between each model’s outsole construction, but there are subtle differences. 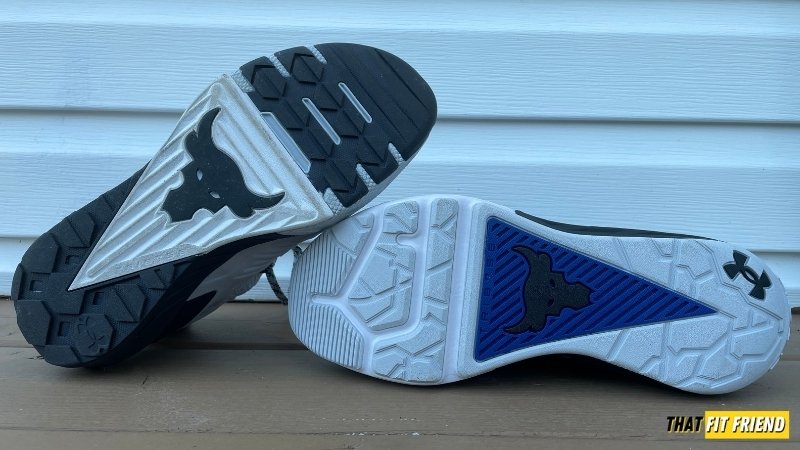 The main difference between each shoe’s outsole construction is the branding, traction patterning, and slightly reduce TriBase outsole width in the PR4. The UA Project Rock 3 features a wider TriBase surface area at the forefoot while the PR4 has been brought in slightly (see how the PR3’s spans all the way to the outside of the shoe).

This isn’t a huge make or break for performance and I think as a whole, it seems like Under Armour is moving more towards this type of TriBase construction. We saw a similar usage of this feature in the UA HOVR Rise 3, for example. The traction pattern is also slightly different, however, I have yet to notice any performance differences in regard to grip.

The midsole construction between the PR3 and PR4 both have HOVR midsoles with slightly higher stack heights. There are aesthetic differences between each model’s midsole, but the overall feel and performance are very similar. 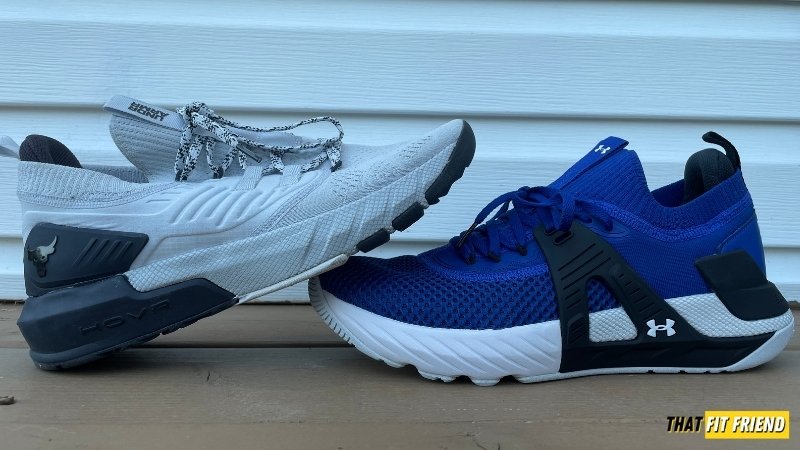 The one main difference between each model’s midsole construction is the additional TPU wrap on the PR4. This adds another level of material spanning up the shoe, however, it doesn’t make a difference with this model’s responsiveness or stability.

One of my favorite parts of the UA Project Rock 4 is its reworked upper construction. The PR4 has a mesh that spans the toe box and midfoot, then a knit material throughout the boot. Compared to the PR3, this upper construction feels much more durable long-term. 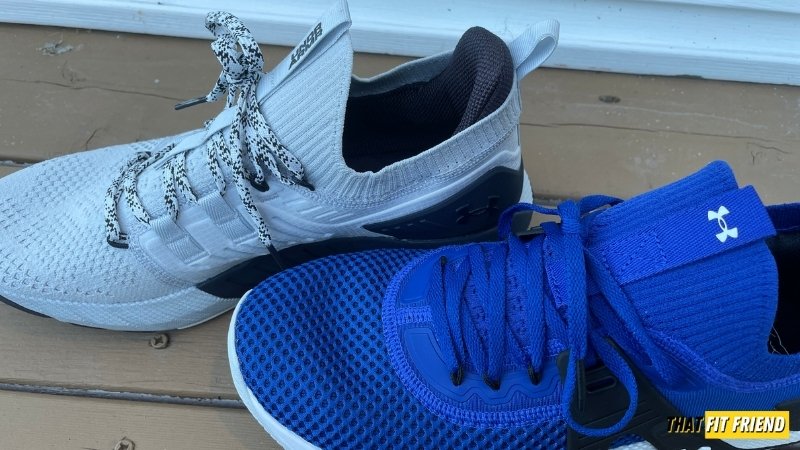 In the PR3, there’s knit throughout which isn’t inherently a bad thing, but knit can break down slightly faster when there’s constant friction in workouts from things like burpees and other exercises where the toe box may be dragging up various surfaces.

At the end of the day, both uppers provide a decent level of comfort across the board. However, for the price, I do think the PR4’s are more durable, which is why I prefer this model’s upper over the PR3, especially if you’re spending $140 USD or more on a shoe.

Neither of these shoes features a formal tongue and they both utilize a bootie-style construction. The PR3’s anterior bootie does come up slightly higher which has received both positive and negative feedback from lifters and athletes. Some love the additional material for support, while others dislike the “digging” feeling it can deliver. 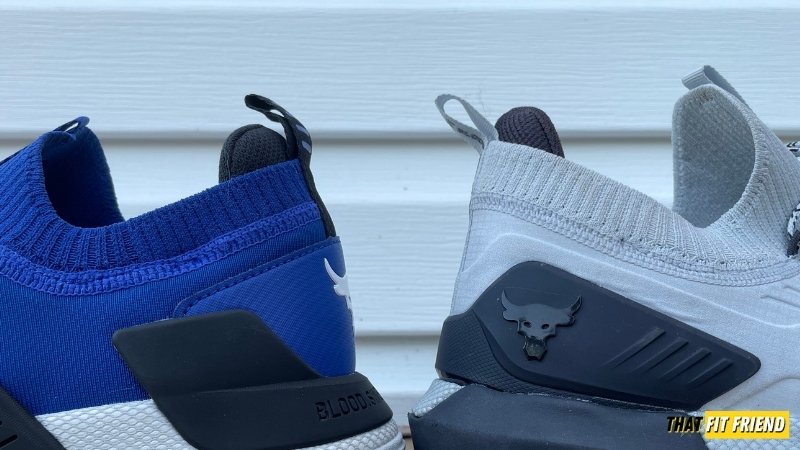 Personally, I think this aspect has to do with your overall ankle anatomy. If you have thicker ankles, then you may notice the bootie more in the PR3 on the anterior side of the ankle.

The lacing system is one of the larger changes between these models and this has also received mixed feedback. In the PR4, we have six eyelets that run up the shoe and one of these eyelets is a TPU wrap. The TPU wrap is nice for locking down the foot, but it does open up the potential for faster lace breakdown and makes the top two eyelets somewhat useless for some in this model. 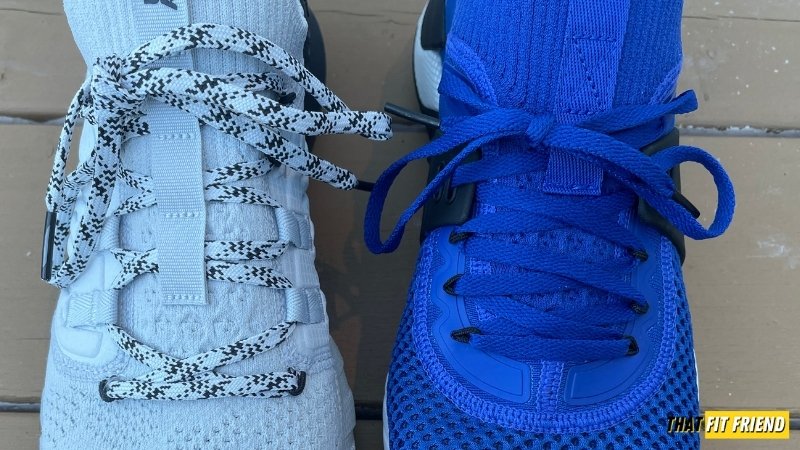 The PR4 also features a loop lacing system up until the TPU wrap which I personally like, and let’s call it what it is, it feels somewhat like Nike Flywire tech. The PR3 has a standard lacing system with five eyelets running up the shoe.

Both lacing systems provide a nice level of security and I don’t think most will run into heel slip issues due to the midfoot lacking support. 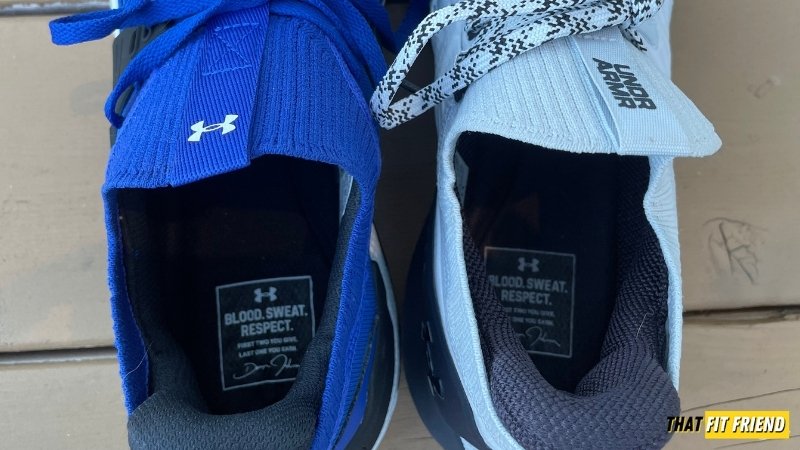 If you have orthotics, then you may run into problems with the PR3 and PR4 due to sizing issues. Since there’s no removable insole, you have less wiggle room with the space you receive in the upper portion of the shoe. Thicker insoles may push your feet excessively into the upper which can then feel super limiting and tight in nature.

Since both of these models are slightly more expensive in nature, I consider durability to be a huge driving factor behind influencing which model you should invest in. With the UA Project Rock 3 costing $140 USD and the UA Project Rock 4 costing $150 USD, you likely want your shoe to last a while.

The UA Project Rock 3 doesn’t necessarily have any glaring durability issues, but I do the PR4 has better long-term durability due to its reworked upper construction. I think the materials used in the PR4 will fair better for long-term use in tough workouts. 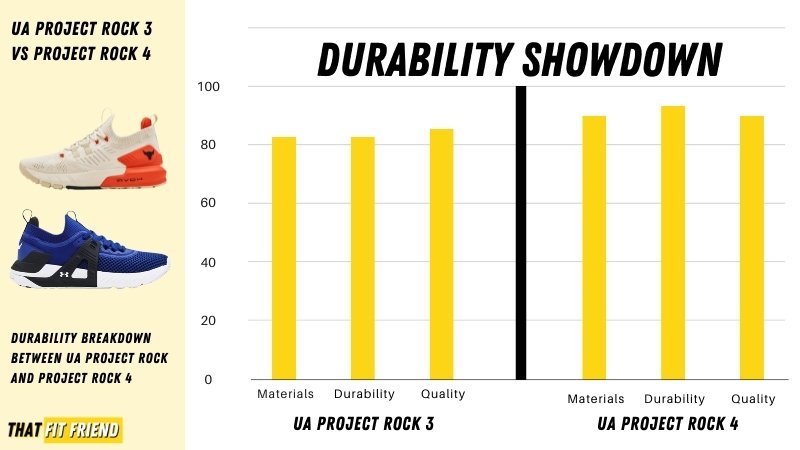 The only caveat about the PR4’s long-term durability is the TPU wrap that’s used in the midfoot. I do think that may lead to lace breakdown over time, but that’s not as bad as having the toe box material fray and rip which is a possibility that you can run into with the knit upper in the PR3.

In the PR3, a safe bet is to size up a half size to a full size. If you have a wider or flatter midfoot, then you’ll want to go up a full size in the PR3. For the PR4, Under Armour has sized them much better despite still utilizing the heel counter and tab.

In the PR4, you should be safe going true to size. For wider and flatter footed athletes, you may still want to size up a half size in this model due to the midfoot running slightly slimmer, but this seems to be a standard fit characteristic in the Project Rock shoe line. 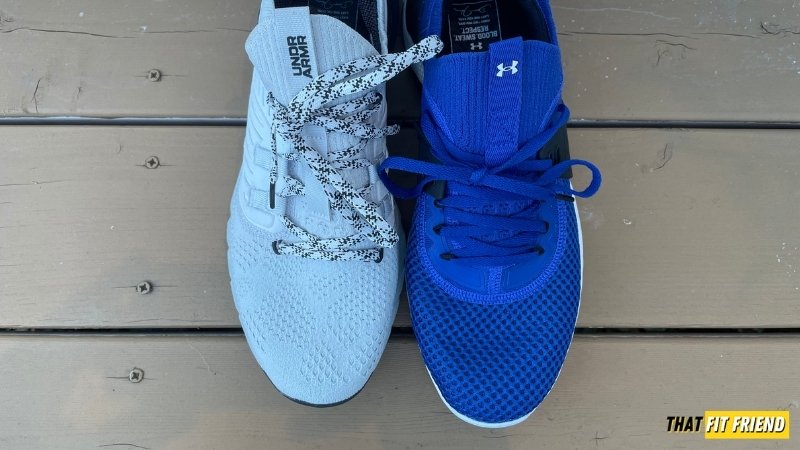 If you have any questions about the PR3 and PR4’s sizing, please feel free to reach out!

Personally, I do think the slight increase is worth it compared to the PR3. As a whole, the construction is better and if this model lasts longer with the slight price increase, then it’s worth it long-term.

As a whole, I think the UA Project Rock 4 is a step in the right direction for the Project Rock shoe line. The Project Rock 2 and 4 are the best models to date and if you’re on the fence between the 3 and 4, go with the 4.

If you have any questions about these two Project Rock shoes, drop comments below or reach out to me personally via Instagram (@jake_boly).