If there’s one thing that Reebok does really well it’s building and rolling out unique spin-off cross-training shoes from core models. Earlier this year, we got to experience the Reebok Nano X1 which has been a hit for some Reebok Nano lovers and a total miss for others. Then, a few months later, Reebok rolled out their Reebok Nano X1 Vegan training shoes.

In this Reebok Nano X1 Adventure, we’re going to dive into the construction specs that make this shoe really interesting and compare it to other Reebok Nano X1 models.

Who Should Buy the Reebok Nano X1 Adventure?

In addition, the outsole has a reworked and thicker lug patterning for additional outdoor traction and there are now lace-lock eyelets at the very top of this shoe. Overall, I think if you’re someone that loves functional fitness and takes their workouts outside often, then the Reebok Nano X1 Adventure is a good fit for you. 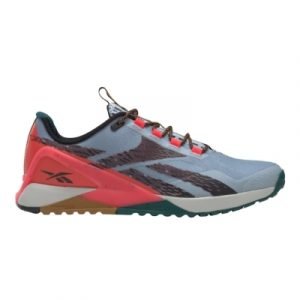 When training, this upper provides a fair amount of breathability and also seems to add more durability to this shoe. I like this construction consideration especially since this model is designed for tackling outdoor training. 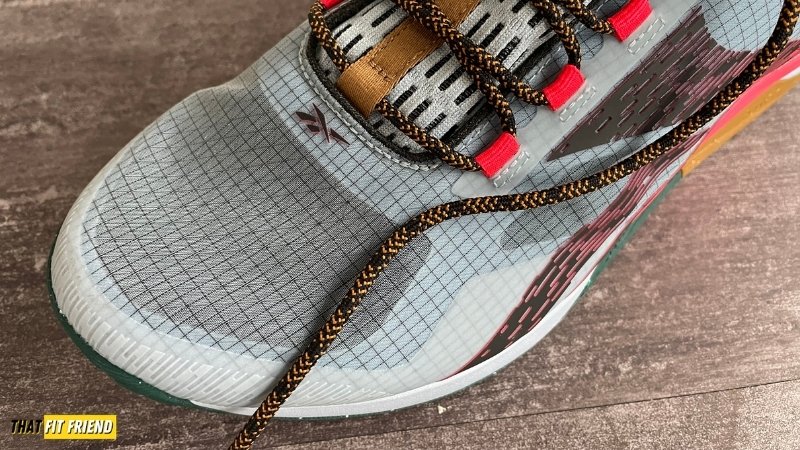 Another subtle pro that comes along with this model is the fifth eyelet that features a lack-lock component. The last thing you want on a trail run or during an outdoor workout is your shoes coming undone or loosening progressively. The additional lack-lock eyelets provide this model with an added level of security which mentally feels pretty good.

The last subtle pro is the outsole construction and patterning. In this model, Reebok appears to have beefed up the rubber throughout the lug pattern, which adds traction when training on surfaces like gravel, dirt, and grass. Compared to the other Reebok Nano X1 models, I’d take this model’s outsole all day for outdoor training.

Despite this model being my favorite Reebok Nano X1 iteration, there are two potential cons I could see other lifters having with this shoe.

The first drawback is that this model does feel different than previous Reebok Nano models. If you loved the Reebok Nano X or earlier models, then it’s worth acknowledging that this model is very different. This shoe has a higher heel-to-toe drop sitting at 7mm and Floatride Energy Foam midsole construction.

I do think the stability and construction changes in this model will work for most lifters, however, it’s worth recognizing the stark difference in how this shoe fits and feels compared to previous Reebok Nano models especially the Reebok Nano X. 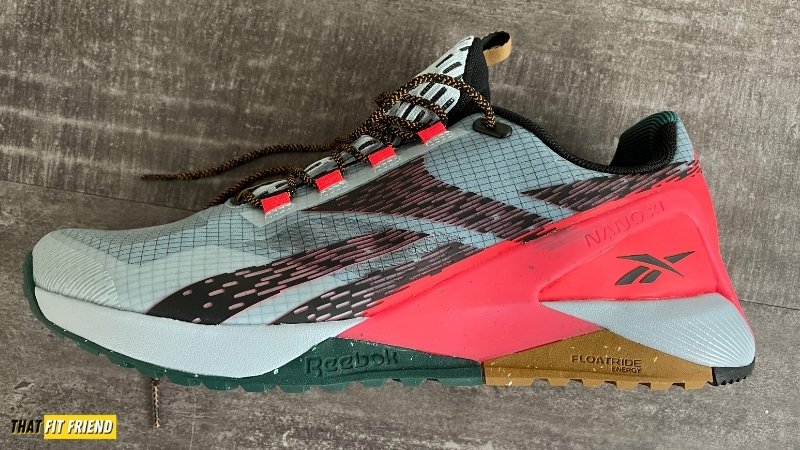 The last drawback which is minor is the overall colorways of the Nano X1 Adventures. Reebok has only released limited colorways. While I actually don’t mind this shoe’s colorway featured in the review, I could see them being a turnoff for lifters and athletes who want to wear this shoe daily.

The color schemes released thus far are somewhat limited so I could see some having an issue with this aspect especially if they want these as daily wear shoes, too.

To test the Reebok Nano X1 Adventure cross-training shoes, I ran them through my normal testing protocol and added a few hikes and shorter trail runs to gauge their outdoor-focused construction. 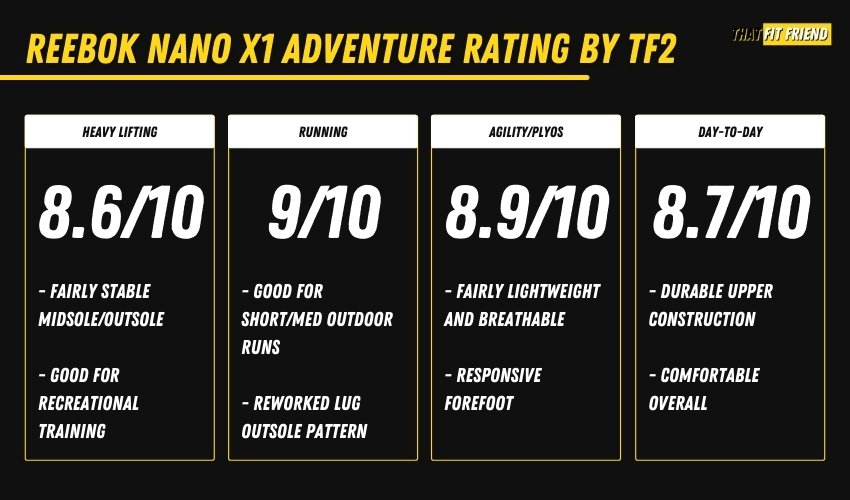 From a lifting point of view, the Nano X1 Adventure feels super similar to the Nano X1. This model’s 7mm heel-to-toe drop and Floatride Energy Foam midsole do an okay job at accommodating recreational lifting. Would I wear and opt for these maxing out my deadlifts? No, but for recreational workouts, these work perfectly well regarding stability.

Per the context of this shoe’s construction, if you plan to train outside, then I think this model’s blend of stability and responsiveness will be a good bet for you. More than likely, you’re not maxing out your lifts during your outdoor sessions so I don’t think stability will be a concern for this demographic.

For agility training and plyometrics, I do enjoy this model for tackling those tasks. The forefoot is responsive and the reworked lug outsole provides an adequate amount of traction on a variety of surfaces. For those performing bounding-style activities and plyometrics outside this is a really nice perk. 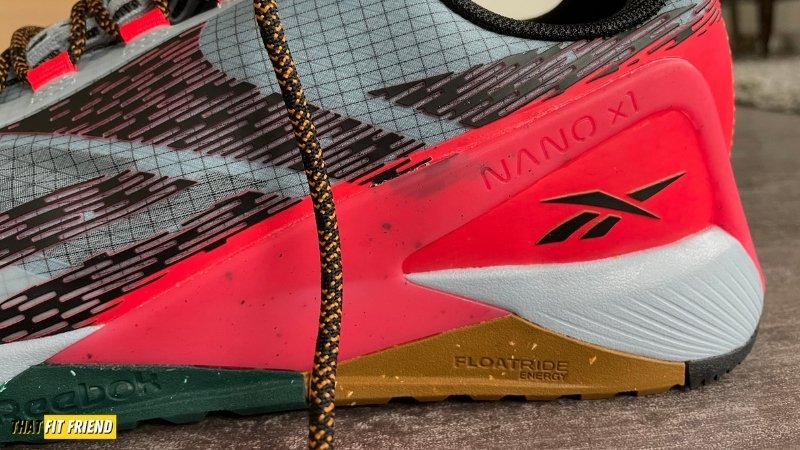 Additionally, I like the Reebok Nano X1’s Floatride Energy Foam midsole due to its responsiveness for this style of training. This model walks a good middle line between being stable, but also responsive.

If you’re interested in a new cross-training shoe for tackling outdoor runs and workouts, I think you’ll like this model. Do note, it’s not as niche as a truly focused trail running shoe, but for the casual outdoor training sessions, I think this model’s overall construction is a hit.

For daily wear, I like this model’s overall comfort similar to the other Reebok Nano X1 shoes, but the colorways may be a turnoff for some. Conversely, if you like the colorways, another pro is the ripstop upper as it’s fairly easy to wipe down and clean if this shoe gets muddy.

I think most athletes will be safe going true-to-size in the Reebok Nano X1 Adventure.

The toe box does feel a tiny bit tighter than the Reebok Nano X1, but I think that’s due to the reworked ripstop upper and feels pretty comfortable after breaking them in with a few training sessions.

For the Reebok Nano X1 Adventure, you can expect to pay $130 USD.

Personally, I think this price point is pretty fair for this cross-training shoe especially if you are an outdoor-focused athlete. Compared to the other Reebok Nano X1 models this has been my favorite to date and it’s priced similarly, a win-win for a specialty-loving shoe enthusiast!

If you’re interested in the main construction aspects of the Reebok Nano X1 Adventure, I’ve provided the main callouts below.

As always, if you’re interested in anything specific about the construction of this model, feel free to comment below or reach out to me personally. 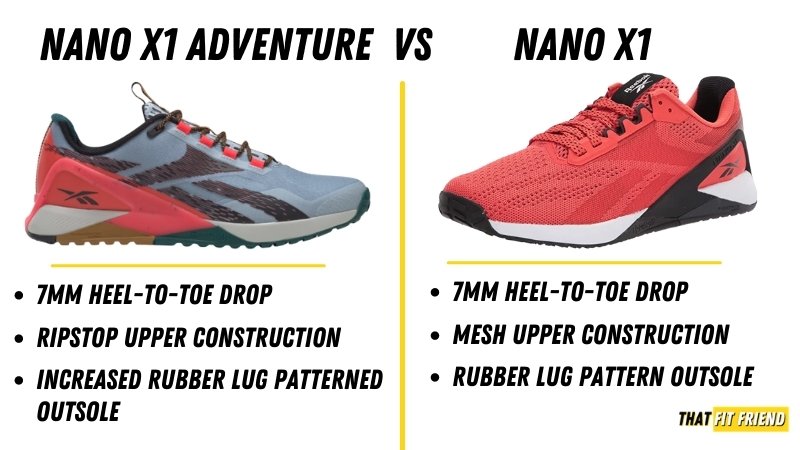 Essentially, you can tell that Reebok specifically made the Nano X1 Adventure for outdoor-focused athletes and lifters. So, if that’s you, then I would say explore this specialty model over the other Nano X1s.

If you’re on the fence about investing in the Reebok Nano X and Reebok Nano X1, then it’s a good idea to assess and understand their differences. Both of these cross-training shoes are very different from one another despite being in the same shoe line.

I’d highly suggest checking out my article breaking down the differences between the Reebok Nano X and Reebok Nano X1 and watching my video below.

If you’ve been looking into the Reebok Nano X1 and all of its iterations, then I would highly suggest checking out the Nano X1 Adventure. This is honestly my favorite Nano X1 to date and I really enjoy the thoughtful construction that this model has.

If you have any questions about the Reebok Nano X1 Adventure, feel free to drop a comment below or reach out via Instagram (@jake_boly)!